Lucas Move mobile applications for voice picking and other voice-directed warehouse tasks are now available on rugged smartphones, including the Samsung Galaxy S6. Move, featuring Jennifer, is the first industrial-grade voice solution for the warehouse that is available on a smartphone, which isn’t surprising since Lucas was also the first company to deliver voice applications on standard industrial computers from Zebra/Motorola (then Symbol Technologies) and other industrial hardware providers, back in the early 2000s.

On this page, you can discover more about your options for using Lucas mobile applications on smartphones and other Android devices, watch a video of smartphones in use at a Lucas customer, download a voice hardware buyer’s guide, and see our answers to frequently asked questions about using smartphones in the DC.

About Lucas Move For Smartphones

Lucas Move is designed to permit the seamless use of voice direction (featuring the voice of Jennifer), speech recognition, visual user interfaces, and imaging technology, similar to typical smartphone applications. The solution for smartphones includes industrial-grade accessories to create a powerful, rugged, secure and economical solution for the warehouse. Just as exciting, by supporting Lucas Move on smartphone platforms, we are able to leverage the innovations driven by the consumer market, such as the introduction of new types of wearable devices (smartwatches, glasses, etc.), that allow us to create even more productive and powerful voice and mobile applications for the warehouse.

How to Choose The Right Device

We continue to deliver Lucas Move applications on the widest range of industrial hardware platforms, in addition to smartphones and other new mobile and wearable devices. As always, the choice is yours as to which mobile computer is best for your application and DC. To help you make that choice, this page includes information about how rugged smartphones compare to other devices, and how tablets and smartphones are being used today in the DC. Finally, use the form at right to get a copy of our Voice Hardware Buyer’s Guide. The Buyer’s Guide outlines some of the key functional factors to consider when selecting a hardware device for use in your DC, including the pros and cons of rugged smartphones and other mobile computers.

Video of Voice Picking on Smartphones

Why didn’t you do this sooner? Smartphones have been around for years.

For years people have asked us why they couldn’t run our applications on smartphones. In the past there were some barriers around ruggedness, security, and other technical and ergonomic issues, but those barriers have been addressed as more and more enterprises have had to meet the needs of employees that have been using their personal devices for work.

Why would someone use a smartphone instead of an industrial device?

There are distinct pros and cons for any device. We recognize that industrial devices have a place in some warehouse environments and we will continue to offer Lucas Move on best of breed industrial devices. That said, Smartphones are smaller, lighter, and cost less upfront than industrial computers, and they are also more powerful, have better UIs and screens, have more memory, etc. In addition to ergonomic and ease of use benefits, they’ve also gotten tougher (see below).

We also believe that by supporting Lucas Move on smartphone platforms, we will be able to leverage the innovations driven by the consumer market, such as the introduction of new types of wearable devices (smartwatches, glasses, etc.), to create even more productive and powerful voice applications for the warehouse.

Ruggedness is a valid consideration for any device that is going to be used in a warehouse, but you have to consider the application. More importantly, the lines between rugged and non-rugged devices are disappearing, as industrial device makers introduce smartphone-like devices and smartphone makers are introducing rugged designs. For example, the Samsung Galaxy S4 Active is an IP64 device and there are a number of industrial cases for the Galaxy that give tumble, shock and sealing ratings superior to those of some industrial devices used today in warehouse voice applications. Likewise, the Motorola Droid Turbo 2 is billed as the world’s first shatterproof smartphone.

In any event, determining which device is appropriate in any situation really depends on how it will be used. For example, with voice, after a worker signs on to Lucas Move, the device is usually worn in a holster on a belt. Therefore, for years we have been specifying and selling lighter, slightly less hardened devices for our applications since the risk of drops is less, holsters add a layer of protection and insulation (for colder environments), and a smaller, lighter form-factor is more ideal for end users. That hasn’t changed and that’s why we offer the broadest device selection possible – from vehicle mounts and ultra rugged wearables to handhelds.

Do smartphones offer the same level of security as industrial devices?

For the last five years corporations have been forced to address the security concerns related to consumer smartphones since many employees have been using their own devices for work. While earlier versions of Android raised concerns about security, the latest Android versions offer business-class security features and there are a number of proven, third-party security products that let you lock down devices, prevent them from being used outside of the warehouse, allow you to remotely wipe them, and otherwise protect not only the physical devices, but the data.

What is the future of smartphones and other consumer technology in the supply chain?

Analyst group VDC predicts that the global market for consumer grade smartphones issued by enterprise and government organizations will continue to grow (reaching 197 million units in 2017 from 130 million in 2012). There are several factors affecting this trend including the next generation of mobile workers who have very different expectations about technology and the drive for lower cost solutions that do more. What we see ahead for mobile workers in the supply chain is mobile work applications that are more powerful, more intuitive, and can run on a wider range of innovative mobile devices and wearable form-factors.

Voice Hardware Buyer's Guide Still not sure if smartphones are right for your DC? Read our Buyer's Guide to understand the key factors to consider when choosing any new device for use with voice.

Subscribe to our monthly e-newsletter for the latest news, events, and customer stories:

This guide on voice picking software will take you through the process of deciding whether or not voice is right for you and the best solutions to get the best return on investment. This paper looks in depth at how different approaches to implementing voice determine the magnitude of productivity gains any facility may achieve. Explore our value calculator to estimate what savings you could see by implementing a Lucas solution in your warehouse. Next Generation Analytics For Warehouse Operations 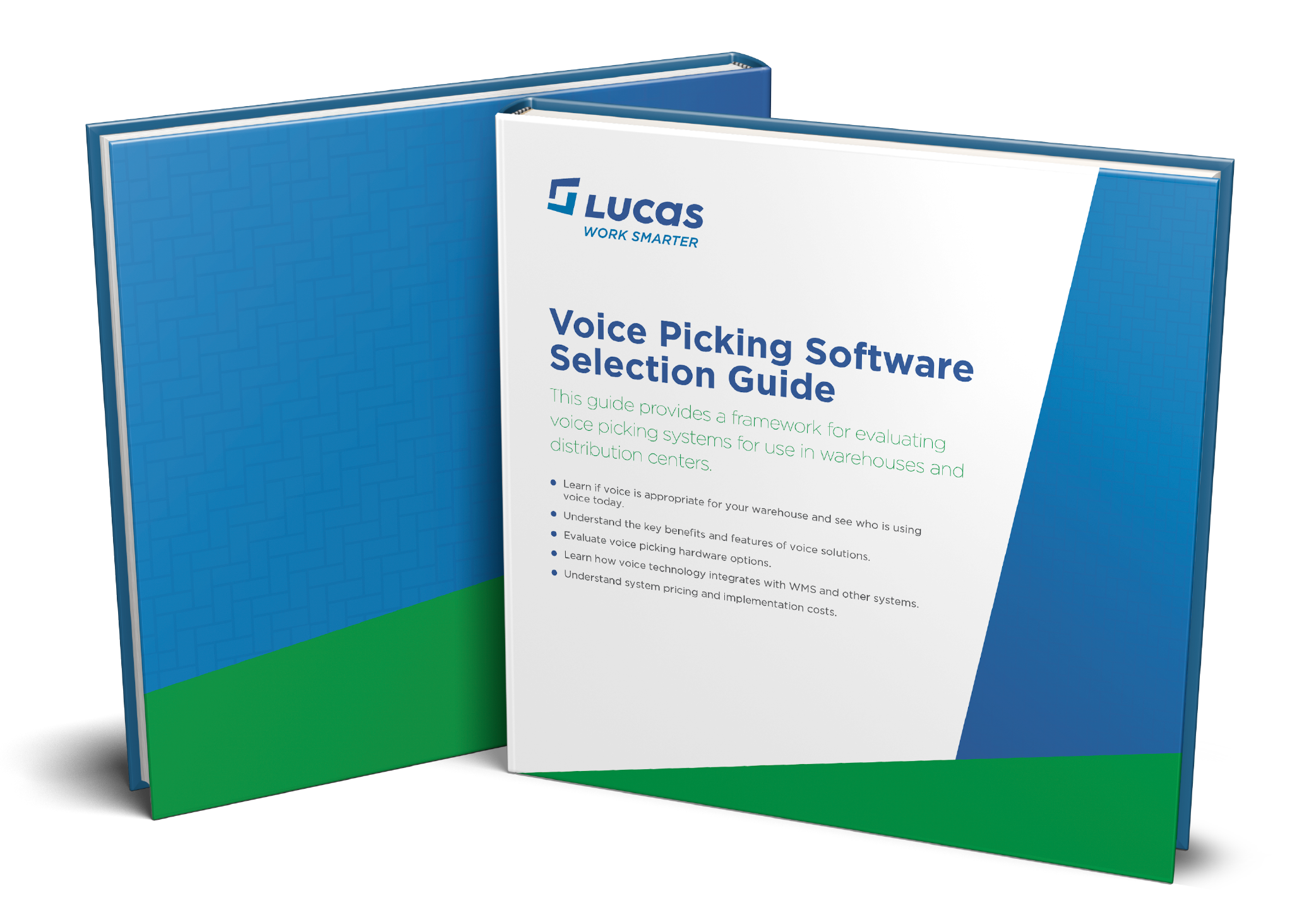 The Voice Picking Selection Guide dives into determining whether voice is right for your warehouse, key benefits and features, hardware options, WMS and ERP integrations and system pricing & implementation costs.